Remarkable poll numbers on immigration: why Democrats folded on the government shutdown

Little wonder Chuck Schumer and the Democrats folded on the government shutdown. Look no further than this Harvard-Harris poll released yesterday:  the public supports 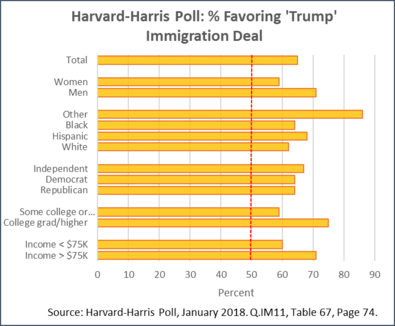 the sort of immigration deal President Trump wants by a margin of around 2 to 1.

Specifically: “Would you favor or oppose a congressional deal that gives undocumented immigrants brought here by their parents work permits and a path to citizenship in exchange for increasing merit preference over preference for relatives, eliminating the diversity visa lottery, and funding barrier security on the U.S.-Mexico border?"

Some 65% of the 985 poll respondents favor such a deal (with a 95% confidence interval for the population as a whole of between 63% and 67%, by my estimate). Amazingly, there are majorities in favor whichever way you slice the sample. (See the first figure).    Every broad ethnic group favors the Trump deal by over 60%, with Hispanics, Blacks, and Asians (‘Other’) even more in favor than Whites.  Republicans and Democrats support it equally.  Interestingly, the better-educated and better-off support it more than the less-educated and less well-off.

The poll is teeming with other remarkable data on attitudes to immigration.  In summary, not only is there a substantial national majority favoring a more restrictive and ‘merit-based’ immigration policy, but there is also – crucially – much agreement on this point across ethnic groups. 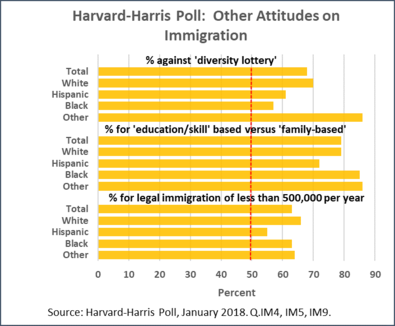 An overall 64% favor reducing legal immigration to less than 500,000 a year, ranging from 66% among Whites to 55% among Hispanics. That would be down from an actual 1.38 million in 2015!  (See second figure). Almost 80% overall want a policy “based on a person's ability to contribute to America as measured by their education and skills,” as against one “based on a person having relatives in the U.S.”  And this rises to 85% among Blacks and Asians.  Almost equally large numbers oppose the so-called “diversity lottery.”

These results would no doubt have been far different if the poll had sampled people  around the world as a whole, a great many of whom could improve their economic lot by migrating to the U.S.. The sensible folk at Harvard-Harris did not do this, though, because the people of the world are not fellow citizens in any representative body politic that could legitimately reflect and give effect to their opinions.  Under our present democratic order, based on nation states, American immigration policy remains to be determined by lawful American citizens.  What this poll shows is that these citizens have some decided opinions on immigration, opinions widely shared across ethnicity, class, gender, and age.

The extremist 'open borders' agenda of libertarian fanatics like George Mason University Professor Bryan Caplan can be realized only through the undermining, evasion or suppression of popular opinion and representative institutions. Here is Caplan today, arguing against any Congressional deal that would switch from family-based 'chain migration' to a merit-based immigration policy. He's against it because it would reduce immigration, rather than increasing it massively, as he would like. "Chain migration is the mechanism that's actually allowed relatively high immigration these past fifty years.  It has worked.  It does work.  If we keep it, it will keep working.  If you favor immigration, giving it up in exchange for legislative promises is folly, " he says.